Guys, I have seen the review title “Eis Eis Baby” or variants thereon so many times I may well scream. Which will add to the screaming I’m already doing because it’s HOT AS ALL HELL out there. It’s sweat-pooling-in-your-crotch hot, it’s muggy and thick and the sun is relentlessly pounding the joy out of summertime.

When I said I was moving to Hamburg your girl here’s friends all mentioned that the city was on the same latitude as Newcastle, which is famously freezing. I happen to like cooler weather and have a large selection of thermals, so I was quite bolshy about my response to the weather. STUFF AND NONSENSE, thought I, I CAN MANAGE WHATEVER HAMBURG CAN PROFFER!

Reader, I was a fool. It is sticky hell out here and I am suffering from a rather unpleasant combination of both shiny-sweat-face, sunburn AND bug bites. I would say I look super-cool but I’m not. I’m frickin HOT. And look like I’m an extra from a particularly swampy John Walters movie, all sticky denim and unwashed t shirts (we haven‘t got the right connectors for the washing machine in our new flat and I‘m DYING).

In this situation, there’s only one reasonable place to go. And fortunately, I live in the right place. Because Germany, and Hamburg in particular, is CRAMMED with ice-cream shops.

Given what I’ve already said about the latitude, this is something of a surprise to me. In fact, studies have shown that Germany consumes the most ice cream in Europe, easily beating out Italy. It’s been estimated in 2018 that Germans consume an average of 5.5kg per person per year, which is INSANE. Rather than an occasional treat, it’s very common in Hamburg for families to pop out for an ice cream together in the evening, and the choice here is overwhelming. The ice cream styles vary widely, with creamy diary-style American ice creams nestling alongside gelato and soft-serves.

The question here, quite naturally, is: what happens in winter? I mean, who wants ice cream in the long dark winters here? I’m yet to find out properly though I have taken soundings from locals on this. I’m told that some places just shutter for the winter, and others re-invent themselves as potato-and-toppings shops aka Kumpir. I‘ll report back in the Autumn!

I’ve had the opportunity to explore some of the very nicest places that Hamburg has to offer, although there are more to be explored along the way! This is a run-down of some of the places we’ve found and enjoyed so far…

Beim Schlump 4, just at the crossroads of Grindelallee, Hallerstrasse and Beim Schlump

This place is awesome. Maybe it’s the 26 flavours which change daily, based on the owner’s whims and wishes. Sometimes its Raffaello flavour, sometimes Snickers, and sometimes fresh blackberry and yoghurt. My favourite is the coconut but I highly recommend the Malteser flavour also. His free and easy approach also applies to the opening hours which are gloriously vague, with differing opening times for „Guten Wetter“ and „Kack Wetter.“ But the draw here is the price. At EUR1 per home-made kugel its easily the best value I’ve found in Hamburg, which includes the price of a basic waffle cone. Even if the kugels are admittedly a little on the small side, and the gelato doesn’t quite have the thick creamy kick of other places, there’s a certain pleasure to walking into a shop with a small coin in your hand and leaving with dessert for a person. You can go buck wild and get a MASSIVE sundae for EUR5. There’s also a small selection of sundaes including spaghetti-Eis. An excellent choice for those on a budget. 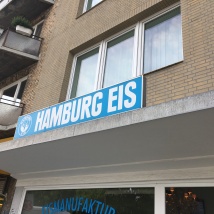 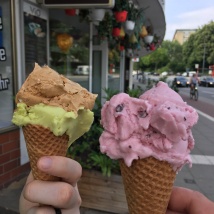 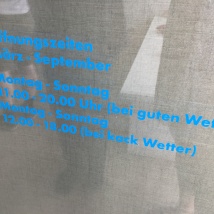 The selection is pretty skimpy but the surprise here is the price/quality bracket. Normally, when you buy ice cream in a tourist-trap location, you pay an extortionate amount of money for walls-level style grossness. But not here. Here, you pay the princely sum of EUR1.30 for a large scoop of gelato-style thick ice cream in a crunchy waffle cone, with all the basic flavours including some delicious variations including tiramisu and orange sorbet. It’s a nice surprise to have an independent business located in a prime spot in town NOT be a total bunch of dickbags about the prices, you know?

Honestly this is one of my favourite places in Hamburg. The cafe is gorgeous, dark teal and blond wood with copper accents and blond wood flooring, and a little window inside so you can see the ice cream being made. And WHAT ice cream. Raspberry and beetroot, goats cheese/honey/walnut, bitter chocolate and coffee and pistachio, all organic and handmade in the back room. It’s a glorious place to sit and while away the time on a hot day, or taking the treat to a nearby park. At EUR1.20 a kugel, treat yourself to two scoops, served in the delicious freshly-baked waffle cones. 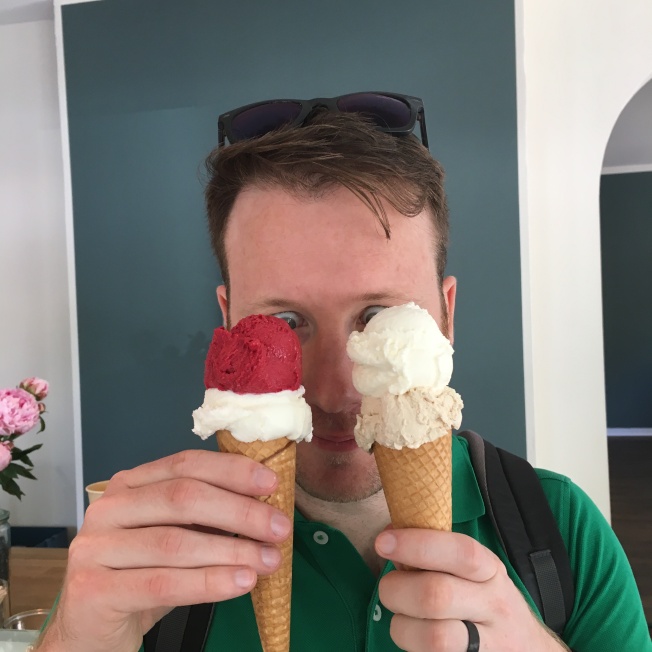 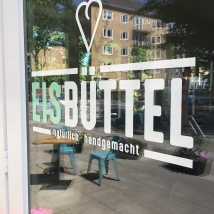 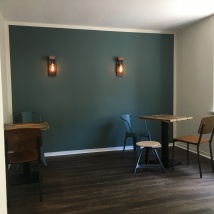 This place, just off Lehmweg near Hoheluft West, serves the nicest ice cream I’ve found in Hamburg. It’s creamy and delicious and deliciously soft, and served by the sweetest and kindest servers in all of Hamburg. They also serve extravagant and delicious sundaes, topped with a rainbow of different toppings and sauces kept by the ices. The pineapple sorbet is particularly delicious on a hot day.

Rentzelstraße 68, near the entrance gates to Planten & Blomen, near the Hamburg Messe entrance

I’ll be honest, this is fairly mass-market stuff, as far as it goes. They for sure serve it well, and they also serve Waldmeister flavour and all sorts of sundae variations which are pretty nice, if a little pricey. What makes this a standout is the location. Right by the water gardens in Planten & Blomen, you can sit on a table amongst the honeysuckles or stroll around the lake’s edge nibbling on a cone. Delicious! 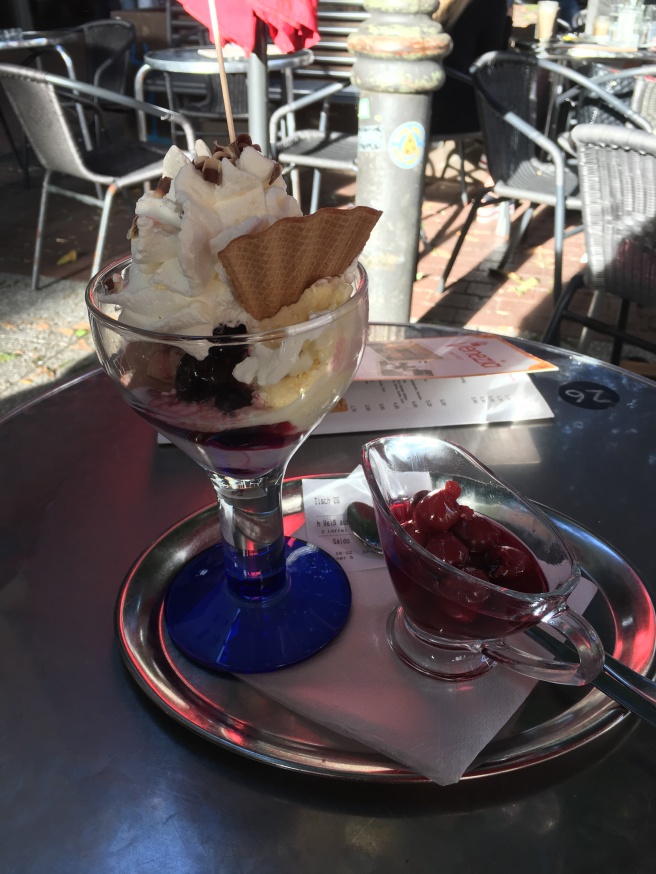 One thought on “Insert pun here: my favourite ice cream shops in Hamburg”