No, it’s not a spelling error. For my good friend’s birthday I was invited to join him on a mini brewery tour of the delectable Maltby Street Market, home of the Kernel Brewery, Southwark Brewing Co, Brew by Numbers and the Bottle Shop. So when considering what cake to bring along, naturally my thoughts turned to incorporating his favourite treat into a straight-up celebration of all things booze.

The Blessed Nigella (peace be upon her name) has rightly been lauded for her impressive guinness cake – however, why drink guinness when you can drink Belgian dubbel beer? I figured that the rich plummy strong brew would fit in right alongside the chocolatey cake, and boy was I right!

A few things to bear in mind with this cake:

As an aside, the icing for this is something that has caused some consternation online, and generally I’d agree that something is rotten in the state of Philadelphia (or your general supermarket cream cheese brand of choice). If you’re used to the old-fashioned block cream cheese which came in packets which dented not unlike butter, you’ll be pretty unimpressed by the watery stuff you get these days, which tends to go awfully runny if you follow traditional recipes, which call for you to stir it as little as possible. In fact, stirring in icing sugar seems to turn it straight into soup. Most recipes ask instead that you stabilise the cream cheese with butter and gingerly sift in the icing sugar bit by bit. Now I aint got time for that shit. So instead I beat the shit out of it and it behaved, largely because of the high cream content. So there you are – keep it cold and whip it fast with an electric whisk, and you should be fine. I’ve given the recipe separately so you can refer to it without reading through all the cakery. You’re welcome.

250ml strong dark beer – try a Belgian Dubbel or even a Tripel!

This is a simple melt-n-mix cake (praise be!), so be aware that you need to have prepped your oven at 180C and have a large 23in springform pan ready and lined.

When you’re good to go, start off with the beer in a large saucepan over a gentle heat. It needs to be large, trust me. Heat the beer until warm, but not boiling. You don’t want to lose the alcohol too early. Add the butter in chunks or slices, melting it gently into the warm beer. Then, whisk in the cocoa and sugar, and take off the heat. Stir together the eggs, soured cream and vanilla together, and beat vigorously into the mix, then whisk in the flour and bicarb. It should form a lovely thick batter.

Pour into the prepared pan, then pop into the oven and let it cook for around 45min to 1 hour – it will be ready when a skewer popped right into the centre comes out with a few damp crumbs clinging to it. Let it cool completely in the tin, on a cooling rack. You really really don’t want to try and unmould this while warm, because it will break. Promise. The fat content renders this hugely soft and so you need it cold to handle it successfully. When you’re ready to ice, peel off the paper and slice in half, ready for filling.*

First off, your ganache filling. Simply melt together the cream and chocolate until it comes together as a thick rich dark ganache. Fill the centre of the cake with about 3/4 of this, reserving a little for decoration. Pop the top half on and get ready to ICE, ICE BABY.

Now it’s time to frost. In a large bowl, stir the cream cheese until smooth, then sift over the sugar and stir it in. It will be runny. DON’T PANIC. Pour in the cream, then apply an electric whisk. After a couple of minutes, it will whip up into a fairly thick, tangy cream. If you’ve the time, fridge it for 30 minutes and it will firm up further, but as long as everything was nice and cold to start with, it will go over the top and sides reasonably well with no further need for fridging.

A beer tasting with a little extra…

It’s how all beer glasses should look… empty! 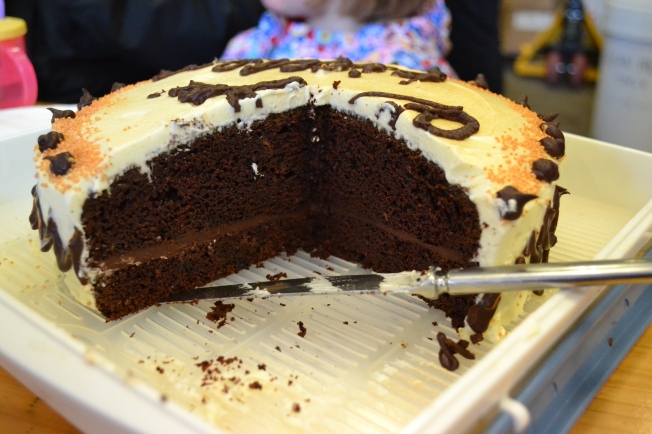 *NB, this cake would also be super-elegant filled with raspberries and cream, or a simple buttercream. It pretty much goes with anything and would be an AMAZING cake for making constructions. f it weren’t for the fact it tastes so beery, it would be an ideal kid’s birthday cake. Save it for the big kid in your life.